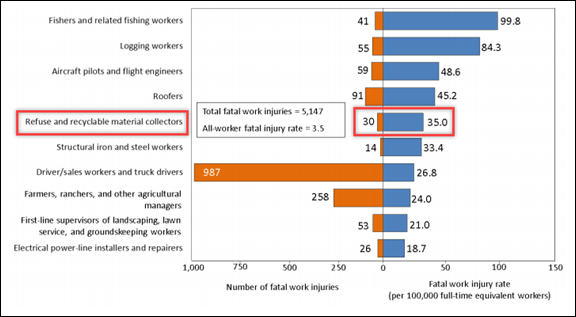 Of the 30 refuse and recyclable material collection deaths, 19 were due to transportation incidents, 5 resulted from contact with objects or equipment, 3 were from a slip, trip or fall, 1 was exposure to a harmful substance or environment, and 2 are not defined. Of the 19 transportation incidents, 12 of the deaths were from vehicle accidents and 6 were workers struck by vehicles.
By industry category, solid waste collection workers (NAICS 562111) suffered 32 on-the-job fatalities, compared to 31 the year before. Twenty-seven were in the private sector and 3 were public, with two undefined. Transportation incidents were the main cause of death for this group. Nearly half of all deaths were workers between the ages of 35 and 54, with the most occurring among workers 45 to 54 years old.
Fatalities among landfill employees (NAICS 562212) have decreased in recent years, from 9 deaths in 2015 to 6 deaths in 2017. Half of them were public sector and half private. Again transportation incidents were the major cause, though machinery was the cause of at least one fatality. Workers aged 35 to 44 made up half of the deaths in this group in 2017.
There were 4 fatalities among material recovery facility (MRF) workers (NAICS 562920) in 2017. In 2016, MRF data didn’t meet BLS publication criteria, though since 2011 it has ranged from a high of 6 to a low of 3. All of the 2017 fatalities were private sector, and three of the four deaths were a result of some contact with an object or equipment. This excludes slips/trips/falls or transportation incidents. 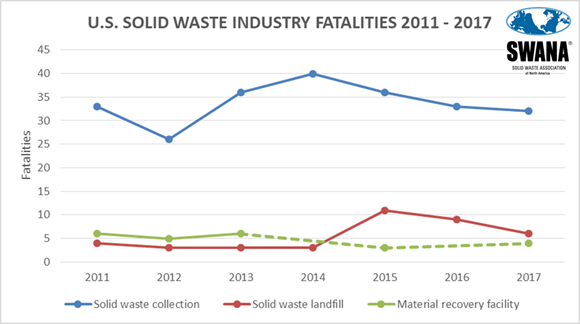 The release of the National Census of Fatal Occupational Injuries each year is a reminder of the significant safety challenges that workers in the solid waste industry face every day. SWANA takes seriously its commitment to get waste and recycling collection out of the top 10 most dangerous jobs and wants to ensure all workers in the industry in the United States and Canada make it home safely each day. Your role as a Safety Ambassador is a key component to those efforts.
One of the most valuable things you can do is to utilize the Hauler Safety Outreach program materials. Putting safety resources directly into the hands of driver and helpers who dump loads at disposal facilities across North America was identified by your group as one of the best things we can do to reach small- and medium-sized haulers. All haulers and Chapter members should be urged to take the SWANA Safety Pledge to commit themselves to consider worker, customer, and public safety in every decision that they make.
In early 2019, SWANA will be releasing its own review and analysis of 2018 fatalities in the United States and Canada, based on the regular tracking that we do throughout the year. If you are aware of any incidents that haven’t reported on to your Chapter, please let us know as soon as possible so that it can be added to our tracking.
If you have any questions about the BLS data, SWANA Hauler Safety Outreach program, or other safety resources, please contact the SWANA-IL chapter at This email address is being protected from spambots. You need JavaScript enabled to view it..

"Advancing the practice of environmentally and economically sound management of municipal solid waste in North America."

SWANA Land of Lincoln Chapter
2037 P.O. Box 2037
Glen Ellyn, Illinois 60138
This email address is being protected from spambots. You need JavaScript enabled to view it.

Board of Directors
Become a Member
Upcoming Events